Quick fact: With more than 60,000 new ones added in September, there are currently over 2.4m Android apps on the Play Store.

App creation is a lucrative business but, because it’s such a saturated market, it can be hard to find any worth downloading. With that in mind, here are four unique, new apps to tide you over until the weekend.

One for Kids: Isotope

Isotope is arguably the one app a child would never ask for. However, it makes a laborious task – learning the periodic table – a little more bearable.
It’s more of a reference app than a game, but it includes every known chemical element (from Hydrogen to Ununoctium and everything in between) as a collection of clickable squares.

While you need to upgrade to the full version (£0.79) for bits of trivia and alternate themes, the free version includes images of every element with a solid state. Along with their atomic and thermodynamic properties. The addition of material information, such as Mohs hardness and crystal structure, makes the app useful for budding geologists and engineers alike.

If you’re still unconvinced, Isotope is also a beautiful, clean app and a masterclass in good user interface design. 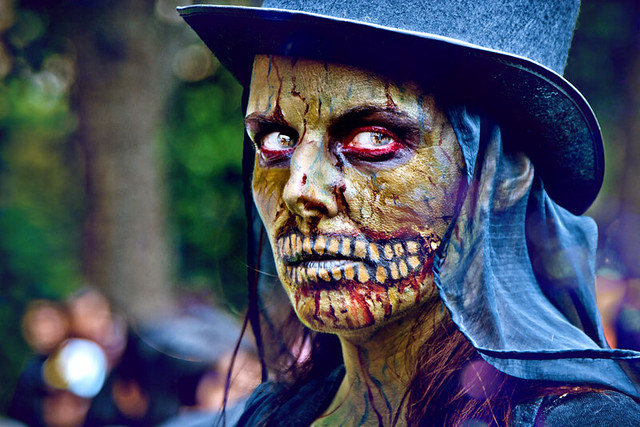 One for Runners: Zombies, Run!

Part running app and part audiobook, Zombies, Run! is a free or premium (£2.99) app that allows you to assume the role of one of “humanity’s last runners” in the middle of a zombie apocalypse. The game allows you to set your running distance around story missions (e.g. collect medical supplies) and plays radio broadcasts from allies and other survivors as you run for your life.

What makes the app so interesting is that it includes a base-building mechanic that relies on your activity – those medical supplies might save digital lives. Zombies, Run! also forces you to vary the intensity of your workout by sending the occasional flock of zombies in hot pursuit. On the downside, it might make you think twice about running through the woods alone.

“Smartphone Photoshoot 2” (CC BY 2.0) by dusk-photography

One for Gamers: Lifeline

Gaming ‘on the go’ is one of the major draws of mobile devices, whether it’s playing the Betway casino app or one of the more casual endeavours like Candy Crush or Angry Birds. But, let’s face it, a lot of mobile games aren’t very good. So, here’s something a bit different for you to play on the train to work.

Lifeline (£1.99) is a throwback to the text-based adventure games of the 1980s like Zork and Colossal Cave Adventure, in which you’ll try to help an astronaut called Taylor survive. The story is told via a series of radio messages and is kept realistic with the inclusion of real-time radio silence. This means that you might never know just how grisly the death you just sent your stranded friend was.

The story is written by Dave Justus, the man behind Vertigo’s popular graphic novel series ‘Fables: the Wolf Among Us’. There are several additional ‘Lifeline’ stories available for fans of the original game.

One for Travellers: Duolingo

If you asked a friend for a list of their life goals, there’s a good chance you’d have a few in common. Whether it’s climbing a mountain, travelling the world or learning a new language, there are lots of people out there with the same aspirations. And, while some of  your dreams might be out of reach for one reason or another, you can now achieve the latter with just your mobile phone and an internet connection. 2016, eh?

Duolingo (which is free) turns learning a new language into a game you can play ten minutes a day. It comes complete with experience levels and coin rewards for progress. The app offers around 20 languages for English-speaking people to learn – including French, German and Spanish. It also includes several Eastern European and Asian languages. The app also integrates with LinkedIn so that you can show off your newfound bilingual abilities to prospective employers.

So, there you have it – four of the more useful, entertaining and educational apps on the Play Store this autumn. We have got your commute sorted, what would you do without us?

Hi, I am Jubin Mathai a tech enthusiast, blogger, android developer and what not. People describe me as a workaholic and to an extent it's right. I love gadgets and hence I write for GadgetMiner. To know more about me follow me on the social media.

OnePlusOne: The Flagship Killer Of 2014

How to Run Android Apps on Your Windows PC

Should I run a VPN on my Android phone?

Our smartphones are constantly connected to the internet nowadays. Data security and online privacy should be a concern for anyone

7 Latest Racing Games of 2018 and Beyond